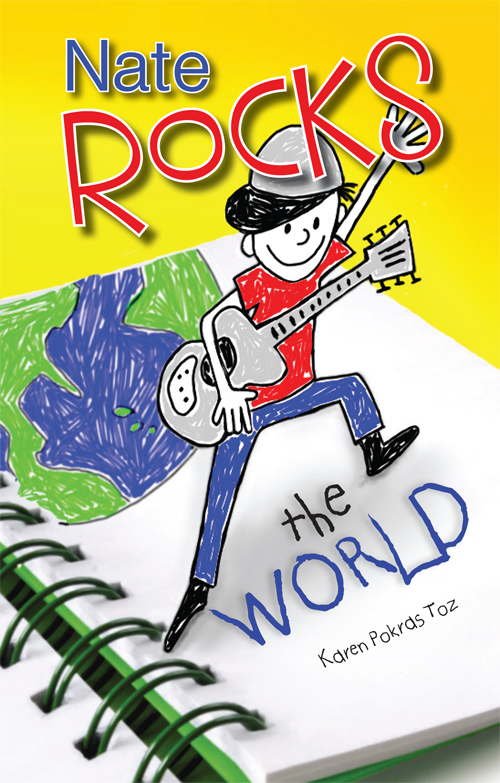 Nate may look, act and talk  like your average forth grader, but he is far from ordinary.  Armed with his vivid imagination, pencil and paper, Nate saves the world every day in some grand way or another.

Like any 10 year old boy, Nate fights with his teenage sister, hates his mom’s cooking,  always gets the wrong science project partner and has a vivid imagination.  Nate’s daydreams seamlessly morph into fighting Dr. Shadow with Captain Asteroid, saving the planet with a huge slingshot, saving a Lady in distress from certain death on the railroad tracks, rocking out with a famous rock band and even taking over for Santa on Christmas Eve.  I love how Nate gets into this sticky situations, but NATE ROCKS always saves the day.

One of my favorite parts was Nate’s plan to get back at his sister for her Halloween scare. He intended on tricking her into dying her hair purple. Unfortunately, the parent’s bathroom shower was broken so dad used Abby’s shampoo and ended up with the purple hair.

I like the clever way that Karen uses part of Nate’s last name Rockledge as his hero persona.  I didn’t notice it until later in the book.

Nate is so much like my 8 year old son. They have the same wild imaginations, they don’t think they are good at sports, but they are loyal friends.  My son writes stories, invents imaginary games to play with his imaginary friends and saves the world from imaginary monsters quite frequently.   I  do hope my son doesn’t think my cooking is as horrible as Nate’s mom’s.

I would recommend this book for ages 7 to 12, or anyone with a crazy imagination.  It’s a great book for those reluctant boy readers; it will keep their attention from the beginning to the end.  Every chapter is packed with action and fun.  Nate Rocks deals with problems and issues that almost every kids can relate to.

I enthusiastically give this book 5 stars!  I have to confess, I read it in two sittings. I couldn’t put it down.  I would have read it in one sitting if I didn’t have those pesky things like work and mommy duties to take care of.  It was definitely laugh out loud funny.  Karen has a way with kid humor and vivid descriptions.   My 8 year old son has read part of it and I keep asking him if he has gotten to a certain part so we can laugh together.   By the way, he loves it almost as much  if not more than I do.

Karen Pokras Toz is a writer, wife, and mom. Karen grew up in the small town of Orange, Connecticut and graduated from Ithaca College with a degree in Finance. She also attended the University of Richmond, where she studied law and business, receiving both a JD and an MBA. Karen has spent the last several years working as a tax accountant, writing in numbers. She recently discovered a passion for writing with words.

She is the 2011 Arthritis Foundation Jingle Bell Run Honoree for the Eastern Pennsylvania Chapter. Karen enjoys gardening, cooking, and spending time with her husband and three children.

Meet Mom Does Reviews' owner and creator- Pam! She is a Wife, Mom, Animal-lover, MRI tech living on her happy homestead in New Hampshire. Their house if full of love with hubby, son, 3 dogs- (2 of them are rescues), 2 cats and a Tortoise named Speedo. Pam loves to spend time with her boys, eat chocolate and drink coffee.

Back to School Time!

Win Get Outside Giveaway from Nat Geo Kids Books, US
.

Posting....
Send this to a friend